"Now, you freakin listen to me an' listen good. I don' care if you think it was that Mother feakin' Theresa, you got me? When I say jump, you say "how high"?"

Cake is a gangster appearing in Overkill crossover comic series.

Cake was captured and interrogated by Jackie Estacado. He wants to find out, which ones of his boys killed a man named Frankie Mancini. After some pressure, Cake gives the name to Jackie. Jackie then shoots a shotgun to Cake's crotch, leaving him alive, tied to the chair. Later, at the hospital, Cake orders his men to find Jackie as someone has been killing their boys. Eventually, Cake is informed that his henchmen have found Jackie. He was spotted walking into a warehouse with an unknown woman.

As Sara kills the Xenomorph she is confronted by Cake and his gang. He threatens her into leading them to Jackie. Sara decides to comply.

Sara brings the gangsters to Predators hideout, finding Jackie in delicate situation, much to Cake's amusement. The gangsters are then attacked by the Predator, while Sara frees Jackie. The Predator shoots Sara with a plasma caster, knocking her away. Then enraged Jackie rips apart both Cake and the Predator.

Cake is a blunt gangster, that follows its own moral code. Only after Jackie shot Cake into his crotch, that he gave in one of his men to Estacado. Cake wants total devotion to him and hates when people working under him questions his actions. He shouted at his men when they questioned his actions.

After Jackie wounds him, Cake develops a grudge. Because of this, he tries to track down and kill Jackie. 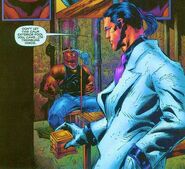 Cake shot at the crotch.

Cake at the hospital.