Finch is a dancer at the school Danielle Baptiste taught at in New York.

She attended Madame Kostigan's Tutu Studio, before the studio was turned over to Danielle Baptiste, while Kostigian returned to Poland to be with her sister, who has cancer. While teaching another class with Finch, Dani sensed something wrong and asks Finch to explain why she is so sad lately. Over coffee, Finch revealed that her boyfriend, Rock, was trying to turn her into a prostitute. When Dani stated that she may be able to help, Finch excitedly kissed her, surprising Dani. However, Finch immediately apologized and left. While accompanied by Finch, Dani had a brief skirmish with Rock at his apartment, using the Witchblade to frighten him. During this encounter, Rock was accidentally shot and killed by a friend of his, who quickly departed. A shaken Dani then went to Sara Pezzini for help, and the two moved the body into the street, making it look like a suicide. An angry Sara then lashed out verbally, and she and Dani parted ways.

With nowhere else to go, Finch moves in with Dani and learns more about the Witchblade. She soon yearned for another kiss, but Dani stopped her, unsure of herself and her own sexuality.

The next morning, Finch soon found herself staring right at the Angelus Force. It only hovered above Finch before smiling and disappearing, just before Dani ran in hearing Finch's screams. Determined for answers, Dani brought Finch to the Curator, who went on to explain about the Angelus and the imbalance created by the splitting of the Witchblade. He theorized that perhaps the Angelus is attracted to Dani's half, hence its appearance at her apartment. As Dani went to reclaim the other half of the Witchblade from Sara, which was slowly corrupting her, Finch could do nothing but wait. As night fell, Finch was soon possessed by the Angelus, who used her to get to Dani so she could be taken as her chosen host.

Finch moved with Dani to the latter's birthplace in New Orleans to figure out where their relationship is going and Dani's position as the Angelus. As soon as they got settled in their new apartment, they go on a tour of the city. They came close to kissing, before they were ambushed by a Chimera. Dani turned into the Angelus and fought it off before the rest of the Angelus host arrived to assist. They then took Dani to show her the Angelus' kingdom of light, leaving Finch in a dark alley. Dani returned just in time to save Finch from two would-be rapists.

Next night, after Dani introduced Finch to her father, Amos Baptiste, she is ambushed this time by Jackie Estacado, who was determined to end her reign as the Angelus before it begins. Before Estacado came close to executing Dani, Finch ran up to defend Dani, despite the fact that she was completely out of her league. She managed to land a punch against Estacado, who decided to set his Darklings against her, had not Dani broke free and the Angelus warriors arriving to assist once again. Dani and Estacado finally settled on a truce.

Returning to their apartment, where Finch treated Dani's wound that she sustained while they talked about their relationship. Dani admitted that even though she's confused, knowing that the Angelus takes female lovers, but gives in to her feelings for Finch. They kiss, only for Amos to interrupt them in shock. After sharing a awkward moment, Amos gives Dani his support, but he says he is not comfortable talking about it at the moment, so they agree to talk about it over dinner later.

After Amos leaves, Dani and Finch make love. But afterwards, they are accosted by Sabine, Dani's lieutenant, desiring the title of Angelus for herself. Sabine was in possession of the Wheel of Shadows, an artifact that could manipulate time itself, which she used to age Finch into a withered, old crone. Dani managed to defeat Sabine and forced her to undo what she did to Finch. As Sabine departed, abandoning her plans to become the Angelus, Dani tells Finch that her position as the Angelus is solidified now. Finch asked as to the state of their relationship and the Angelus. Dani says that she and the Angelus are the same being in love with her, and said they need to find out how to make it all work. After getting Finch a haircut and manicure (because her hair and nails grew from the accelerated aging), they meet with Dani's father for dinner.

In a universal rewrite during the "Artifacts" series, Finch is a dance instructor teaching an eight-year-old Hope Estacado, who refuses to wear an angel costume during class. She later encounters Dani, who is a police detective, not the Angelus, in this universe, and it is apparent that they are not in a relationship, though they have a slight recollection of each other. Because Jackie Estacado had divided the Angelus Force among its warriors like a hive mind to diminish its potential threat, Dani hoped to use the Rapture, given to her by Tom Judge to attract the Angelus, so she could become its host again. Both women asked each other they could go out for coffee, before Angelus Warriors showed up. But instead of possessing Dani, the Angelus possessed Finch. After a brief skirmish with Estacado, which was diffused by Judge, Finch departed back to her realm. Two weeks later, with help from Judge, Finch met with Dani, who offers support in her role as the Angelus.

As if some divine force wants them back together, Dani and Finch get to sleeping together. They are then interrupted by a wounded Angelus warrior, who warns Finch that her kingdom is under attack. Accompanied by an insistent Dani, Finch finds her kingdom in ruins by an unknown monster. Finch and her warrior attacked the monster. Dani tried getting its attention with her gun. Finch soon had to choose whether to save Dani or her warrior; she chose Dani. Later returning to Dani's apartment, they find Judge waiting for them, asking for their help in stopping Estacado by seeking out the other Artifact bearers. Together, they seek out the Magdelena, bearer of the Spear of Destiny, and Rachel Harrison, bearer of the Heart Stone. Tom had them attack Estacado after learning that he made allies with dark creatures older than the Darkness, the same creatures that attacked the Angelus haven. Unfortunately, they were outmatched, forcing them to retreat and consider turning to Sara Pezzini.

Finch is a bisexual, as evidenced by her relationship with Danielle and previously relationship with Rock. At first she seems to be shy and unwilling to open up, but she eventually does as she further gets to know someone. She is awkward about showing her affection, but it appears that she is faithful to whom she loves. 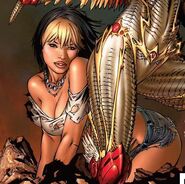 Add a photo to this gallery
Retrieved from "https://witchblade.fandom.com/wiki/Finch?oldid=6412"
Community content is available under CC-BY-SA unless otherwise noted.