Headquarters of the United Nations is a location featured in JLA/Witchblade crossover.

Wonder Woman gives a speech on women in the 21st century in U.N. Symposium, when she's overcome by the Witchblade and declares that women around the world should rise up and throw off the yoke of patriarchal tyranny. She then beats up two UN senators who doesn't listen to her. She then senses the same machines sent by Lex Luthor who attacked the Witchblade before and goes after them. 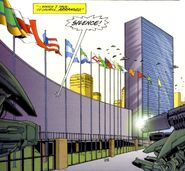 Inside
Add a photo to this gallery
Retrieved from "https://witchblade.fandom.com/wiki/Headquarters_of_the_United_Nations?oldid=5801"
Community content is available under CC-BY-SA unless otherwise noted.