Maria is part of the Second generation of sisters created by Tatsuoki Furumizu and was the first to be equipped with a Dual Cloneblade. She's the main antagonist in the final quarter of the anime adaptation of Witchblade.

Maria is first seen in combat training alongside her other second-generation Neogene sisters (created by Tatsuoki Furumizu using his genetic code combined with that of 1st generation neogenes). During combat training, she goes overboard on her level of violence and beats her sparring partner to death, with her supervisor Rie Nishida remarking that this is the fifth time that she has done this.

When she visits Furumizu to thank him for everything he’s done for her, Nora arrives in the room  and begins talking about their work, which infuriates Maria who fins both of their behaviours rude. Resultantly, Furumizu orders Nora to take Maria shopping for toys to calm her down. When Maria sees a parent who won’t let buy her daughter a stuffed animal toy, she pushes the woman down the stairs in the store, and almost injures the girl by accident. Nora then takes Maria away and reprimands her strongly, telling her that she will inform Rie Nishida that she (Maria) is not ready for the outside world yet, and shouldn’t be let out yet. In retaliation, Maria tries to punch Nora, who grabs an twists her fist, visibly hurting Maria, who starts on a childish temper tantrum in which she tells Nora “I hope you die.”

Maria is later seen refusing to study for her school work, and being very childish about it, because with her IQ of 200 she sees it as unnecessary. When Furumizu offers an incentive to study, Maria demands to see her mother. Furumizu tells Maria to devote herself to her studies, and once she is able to wield the specially powerful Cloneblade they have created, he will tell her everything there is to know about her mother.

This pushes Maria to train and study exceptionally hard, so when she is denied access to the Cloneblade a few weeks later due to it being unfinished, she had a tantrum alone in her room, an later began talking to her toys about her fantasies about how life would be if she lived with her mother (who she has never met due to living her whole life in a medical laboratory facility).

Weeks later, Maria is finally given the Cloneblade and is revealed to be fully compatible, and receives its power. Resultantly, Furumizu reveals to her that her mother is Reina Soho.

When she visits Reina and discover that she already has a daughter named Rihoko and that she (Reina) does not really love Maria, only fears her, Maria can’t cope with the concept of not being loved and cared for by her mother, she snaps, believing that the only way to her mother’s heart is to replace Rihoko in it. Resultantly, she tries to kill Rihoko, but Reina stops her, and the to engage in a violent confrontation that concludes with Maria killing her mother.

It is later revealed that Furumizu has been using Maria as the “perfect mother” to create a new, “true” body for Furumizu in his “next life”, as tells her (believing her to be asleep), which visibly distresses Maria. After he leaves, Maria realises that the Neogenes that Furumizu created are superior to him and to humanity due to their cloneblade potential, and declare that they are not monsters, but “chosen ones.”

The next day in combat training, she easily defeats her opponent Oui, but does not go overboard with her anger as she has before, and offers her opponent advice on how to defeat her in the future. Furumizu believes that they should advance to the next generation in creating his “perfect humanity” as a result of Maria’s increased maturity.

However, Maria has no intention of being a part of Furumizu's plot, as she views him as “Nothing more than a pathetic, selfish old man”, and that “all he has is power. The power to get whatever he wants.”  The next day, Nishida and Furumizu have used her DNA to begin work on their “perfect human”, and when Maria come into the lab to visit her, he is initially congratulatory and ask what she wants, to which Maria replies “There is one thing… YOUR POWER!”, before stabbing Furumizu through the chest, while Nishida watches in horror. Maria then uses her hair as a weapon in a similar fashion to Nora by manipulating it to pierce the bodies of all of the nurses present, killing all of them instantly.

Furumizu, still alive, is then told by Nishida that she too had betrayed him, as the perfect humanity he desired could never be achieved with his genes. Thus, she had scrapped his genes from the Neogene project. Outraged by this, Furumizu angrily demands that the program be changed, but he is then fatally stabbed in the spine by Maria who call him pathetic. She then tells Nishida not to go anywhere, as she may still be of use (with Nishida struggling to contain her joy at the ferocity and power wielded by her creation).

Maria then sent Aoi to oversee a combat contest between all of the Neogene sisters, so that the victor could help her find and take control of the Witchblade, unaware that Nishida secretly desires the Witchblade for herself and has formed a secret alliance with Mado from Doji Group Industries. The winner of Maria’s contest is named Asami.

Later, when Doji’s 3,800 malfunctioning iWeapons attack Tokyo while Maria is searching for the Witchblade, Maria, Aoi and Asagi enter Cloneblade form to kill as many iWeapons as possible. When they locate the Witchblade, Asagi points out to Maria that power is only a means, not an end, and that Maria doesn’t actually have an ultimate goal after she get the Witchblade.

While Masane, wielding the Witchblade, is fighting the iWeapons, Maria, Aoi and Asagi attack her using their Cloneblade powers, and when they seem to have the upper hand Masane surprisingly slashes Maria across the belly. This causes Aoi to go into an all-out rage and violently attack Masane with intense ferocity, only for Masane to stab her through the chest, killing her. When Asagi reprimands Maria for having no real end goal, Maria kills her by turning her finger nails into wires, and blasting them through Asagi’s head and torso.

While duelling Maria, Masane senses that Ryoko’s life is in danger and end out a blast of energy to attract all of the iWeapons towards her and Maria. During her fight the fight on Tokyo Tower, Maria meets her demise while either fantasizing despairingly about her mother. In her final moments, she asks either the hallucination or ghost of her mother if "she still loved her". Maria barely has the chance to finish her sentence as she turns to crystal dust.

Maria undergoes many changes throughout the series. She starts out as a hyper, mentally unstable adolescent with an extreme inferiority complex. While extremely strong and dangerous, she is little more than an insecure child desperate for attention and a mother to call her own. This changes when her actual mother, Reina Soho, rejects her. After killing Reina in a rage, her personality becomes almost catatonic. She also changes her appearance to match the deceased Reina's.

After hearing of Furumizu's plans to use her as a surrogate mother for his "perfect" clone, her disgust transforms her into a megalomaniacal psychopath who seeks power at all costs. She kills Furumizu and seizes control of the NswF. She pledges to transform the NswF into an army that will secure power for herself as well as the Neogene "chosen ones".

In truth, however, Maria is the leader of the organization in name only. With no clear goal other than to obtain power at all costs, Maria becomes even more secretive and reclusive than her late "father". With the exception of Aoi, cloneblades such as Asagi view her as an insecure child trying to "act tough". As Maria drifts aimlessly, Nishida effectively runs the entire organization and continues to use its resources to hunt for the Witchblade.

Maria equipped with the Dual Cloneblades

Maria in a hospital.

Maria with Aoi and Asagi.

Maria killed by a iWeapon as she hallucinates Reina. 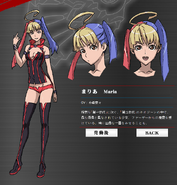 Add a photo to this gallery
Retrieved from "https://witchblade.fandom.com/wiki/Maria?oldid=9362"
Community content is available under CC-BY-SA unless otherwise noted.