"I am the ruler of the underworld and I've come to take your soul."

– Mephisto to Sara and Wolverine. [src]

Mephisto is a demon appearing in Top Cow and Marvel crossover, Wolverine/Witchblade.

Mephisto travelled to the Top Cow's dimension, bent on acquiring souls to make himself more powerful for his new home. He proceed to take thousands of New Year's revelers' souls to his new hell, leaving only Wolverine, his agent Zoe Culloden and Cyberforce's renegade team-member Ballistic behind in Times Square to wonder just what happened.

He then turn his focus to Sara Pezzini and put her in alternate reality were her first partner Michael Yee was still alive. Mephisto then assumed the identity of deceased Ian Nottingham. As Sara comes to check on Kenneth Irons' home, she's surprised to see it completely fine. There, she meets Mephisto, pretending to be Ian and proceeds to kiss her.

That evening, Sara and Ian go out to dinner, and Wolverine bursts in through a window to confront them. Ian draws two katanas and they fight until Sara tackles Wolverine. They then notice that the other restaurant patrons are oblivious to the chaos. Sara realizes all she's seen that day is illusion as Ian reveals himself to actually be Mephisto. Sara, now covered by the Witchblade, joins Wolverine in attacking the demon. Mephisto shrugs off Sara's blast as he tells her, he intends to claim her soul.

When Mephisto comes to Top Cow's universe, Zoe Culloden sends Elektra to help Sara and Wolverine to defeat him. Mephisto conjures a pool of infernal flames which consume Logan, and the mutant disappears. As the hellfire spreads, the Witchblade cocoons Sara and Elektra. When the pair emerge, they find themselves in a snow-covered graveyard.

Without warning, they are set upon by a troop of ninjas. Elektra exhorts Sara to not hold back, and eventually the struggle ends with only the two women still living. They then trek to a cave within which they find a desecrated church. There is a ceremony taking place inside, presided over by a 'bishop' who craves sacrifices. The small 'congregation' turn on Sara and Elektra. The latter prepares to defend herself with deadly force, but Sara holds her back, telling her that would play into Mephisto's hands.

Sure enough, the bishop is revealed to actually be Mephisto. The demon offers Sara a return to a normal life, like the one she witnessed an illusion of, if she agrees to be his bride. When Elektra protests, Mephisto renders her unconscious. However, Sara defies the demon, threatening him with the Witchblade. He teleports her back to her home, to deal with her later, leaving Elektra in his grip.

Mephisto as Ian having a dinner with Sara. 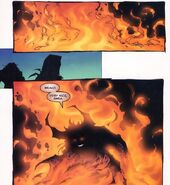 Mephisto coming out of the fire.
Add a photo to this gallery
Retrieved from "https://witchblade.fandom.com/wiki/Mephisto?oldid=5999"
Community content is available under CC-BY-SA unless otherwise noted.