Nora is seen many times throughout the series as Tatsuoki Furumizu’s personal assistant. Her true nature as a Cloneblade is revealed in episode 11, when she is sent by Furumizu to retrieve the Witchblade wielder Masane Amaha. Attempting to kidnap Masane, the two reveal their powers to one another and begin duelling. In the battle, Masane’s allies with the Doji Group attempt to resuce her, but Nora impales her through the stomach with her hair, and then uses her hair to climb out of the building.

Nora takes Masane to the NSWF medical facility, where she is experimented on by Dr. Rie Nishida, but later on Masane is awoken by her friend Tazawa, and Nora observes the rescue from a distance.

Later, under Rie’s request, Nora stalks The Captain (a friend of Masane and Ryoko Amaha)’s dog in order to locate Masane. She throws a gas cylinder into the boat and knocks out Ryoko, but Ryoko’s birth mother Reina Soho appears on the boat before she can take her, and blocks her path. Nora then activates her cloneblade powers, as does Reina, and the two begin to duel violently using their powers. In the end, Reina revealed that she could also use her hair as a blade weapon, and impaled Nora in 3 places in her belly, killing her.

She is one of Furumizu's most loyal and reliable subordinates. Cold, arrogant and blunt in her interactions with others, she is very competitive with her sisters and is prone to jealousy. After watching Furimuzu reward Maria's tantrum with a trip to the toy store, Nora roughly manhandles her and confines her to a hotel room after the mentally unstable Neogene loses her temper in public.

With the exception of Furumizu himself, she considers everyone and everything around her as a tool for her advancement. She is also a very powerful cloneblade. Unlike Masane and Shiori, she is able to effectively control her violent impulses while transformed much like Reina.

She battles Reina, trying to get Rihoko. She ultimately is impaled by Reina and is killed. It is worth noting that she sees Reina as her biggest rival as she was by far the most powerful Neogene and it is her personal rivalry that caused her death. 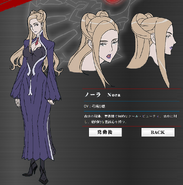 Character card.
Add a photo to this gallery
Retrieved from "https://witchblade.fandom.com/wiki/Nora?oldid=9176"
Community content is available under CC-BY-SA unless otherwise noted.