The Predator (Overkill) is a member of Yautja species appearing Overkill comic crossover.

The Predator came to Earth in search of worthy prey, in particular Jackie Estacado and Sara Pezzini. Together with his pet Xenomorph, he attacked gangsters in the warehouse district of New York. Eventually, Jackie and Sara came looking for him. Using his Xenomorph, he lay a trap for them. While both of them were distracted by the Xenomorph, Predator threw a flashbang a Jackie, immobilizing him. Jackie is confronted by the Predator. Sara comes to his rescue and fights with Predator. She manages to destroy its spear and cut of its arm. Wounded, the Predator escapes.

As Sara and Jackie try to track down, Predator, he ambushes them with his Xenomorph. The Predator dazes Jackie with a flashbang and kidnaps him, leaving Sara alone to deal with the Xenomorph.

Predator brings Jackie to his hideout and ties him to a table. He then puts a probe down Jackie's butt.Jackie curses and threatens the Predator, who cloaks. Sara brings the gangsters to Predators hideout, finding Jackie in delicate situation, much to Cake's amusement. The gangsters are then attacked by the Predator, while Sara frees Jackie. The Predator shoots Sara with a plasma caster, knocking her away. Then enraged Jackie rips apart both Cake and Predator. As the Predator dies, he sends out a homing beacon, alerting other Predators to his fate. The other Predators arrive and after revealing some information about Witchblade to Sara, take their fallen comrades body and leave. 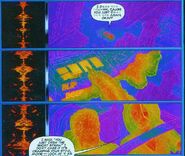 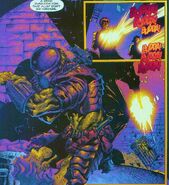 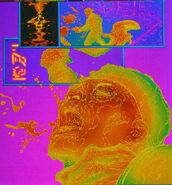 Predator loosing his arm to Witchblade. 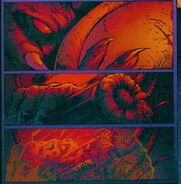 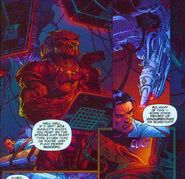 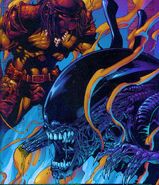 Predator with his pet Xenomorph. 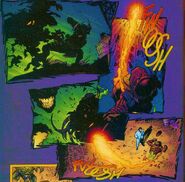 Predator's body taken by his comrades.
Community content is available under CC-BY-SA unless otherwise noted.