Rihoko is a very mature girl for her age who usually does the chores around the house because her mom isn't that coordinated.

However, she has acted her age on multiple occasions.

Rihoko's biological mother is Reina Soho, who kept her pregnancy a secret while working with the NswF and Douji Group to uncover the secrets of the Witchblade. Eventually, she stole the Witchblade because she tested highly compatible to wield it. However, after giving birth to Rihoko, her compatibility dropped significantly. This implies that Rihoko is the ideal 'host' for the Witchblade.

Six years before the series starts, the NswF and Douji corners Reina on a bridge, while it went according to plan at first, the Witchblade made its presence known and released a power surge that caused the Great Quake. Rihoko was found by an amnesiac Masane Amaha, who thought she was her daughter. 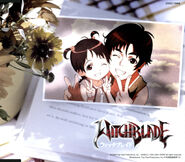 Add a photo to this gallery
Retrieved from "https://witchblade.fandom.com/wiki/Rihoko_Amaha?oldid=9755"
Community content is available under CC-BY-SA unless otherwise noted.